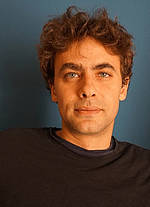 Arvand Haschemi, born 1981, was trained at the Vienna Bio Center, University of Vienna, in biochemistry, cell biology and immunology. Subsequently, he moved to Boston, where he investigated in macrophages a functional cross-talk of adenosine signaling and heme metabolism in the laboratory of Leo Otterbein and Fritz H. Bach at Harvard Medical School to obtain his MSc degree in Molecular Biology (University of Vienna).

Returning to Austria for PhD studies at the Medical University of Vienna, Dr. Haschemi continued to work on metabolism and immune cell effector functions. During this period he was further awarded with a visiting PhD fellowship at Harvard University to bridge his research in the US and Austria. In 2018, Dr. Haschemi became Associate Professor at the Department of Laboratory Medicine to understand the molecular relationships between metabolism and cellular physiology and translate this into human medicine.

Know-how and research interests
In his interdisciplinary research Dr. Haschemi explores biochemical pathways and investigates metabolic reprogramming in cells to ultimately understand their functional and physiological consequences. He significantly contributed to further develop the research field now known as “immunometabolism” by characterizing for the first time stimulus-specific metabolic fluxes in macrophages and by revealing a novel carbohydrate kinase Shpk (aka CARKL) as key metabolic regulator of carbohydrate metabolism (Haschemi et al CellMetab 2012, Nagy and Haschemi, 2013 and 2015). In ongoing studies, he is focusing on immunometabolism and cancer metabolism.

His research aims to disentangle molecular mechanisms regulating the interface of glycolysis and the pentose phosphate pathway, and cellular effector functions in various human diseases like atherosclerosis and cancer. To achieve this, they make use of biochemical and molecular approaches, mouse genetics, clinical samples and even develop new methods or tools to enable groundbreaking insights into human biology and medicine. To overcome current limitations in metabolic research, his lab recently developed the first metabolic profiling tool to investigate single-cell metabolism in intact tissue microenvironments (Cell Metabolism, Miller et al 2017, cover-featured).