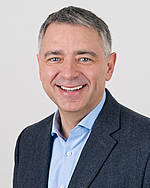 Robert Kralovics was born in 1970 in Slovakia and he is a Czech citizen. He is a graduate of the Comenius University, Bratislava, where he received his MSc degree in Molecular Biology and Genetics in 1988. He completed his studies in 1997 at the Institute of Biophysics, Academy of Sciences of the Czech Republic, Brno where he obtained his PhD degree in plant genomics. During his PhD studies in 1995 he visited Joe Prchal's laboratory in Birmingham, USA as a Visiting Scientist where he worked on familial disorders of red blood cell production. After completion of his PhD studies he returned to the University of Alabama at Birmingham, USA and continued working on polycythemias and myeloproliferative disorders as a Postdoctoral Fellow.
In 2000, Robert Kralovics followed Joe Prchal to Baylor College of Medicine, Houston, USA where he obtained a tenure-track Assistant Professor position at the Department of Medicine. In 2001, Robert Kralovics returned to Europe and joined the laboratory of Radek Skoda at the DKFZ, Heidelberg, Germany and moved with the Skoda lab a year later to Basel, Switzerland where he worked till 2006 as a Senior Project Leader. In 2006, Robert Kralovics became Principal Investigator at the Research Center for Molecular Medicine (CeMM) in Vienna where he established his research group. During this time Robert Kralovics closely collaborated with the Medical University of Vienna where he initially held a secondary affiliation. Robert Kralovics joined the Department of Laboratory Medicine, KILM at the Medical University of Vienna in 2017.

Know-how and research interests
Robert Kralovics is an expert in the field of myeloproliferative neoplasms (MPNs) and myeloid hematopoietic malignancies. His work lead to the discoveries of the two main MPN disease-causing mutations in the JAK2 and CALR genes both prominently published in N Engl J Med in 2005 and 2013, respectively (Kralovics et al., 2005; Klampfl et al., 2013). He described a number of somatic mutations in MPNs that are associated with progression to secondary acute myeloid leukemia (Harutyunyan et al., 2011; Klampfl et al., 2011) and several hereditary predispositions to MPN (Olcaydu et al., 2009; Harutyunyan et al., 2016).
Most recently, his research is focused on developing therapeutic solutions for MPNs and contributed to clinical trials that lead to regulatory approval of interferon alpha for first line treatment of polycythemia vera. His group is pioneering immunotherapy for MPNs and recently published a study exploring the neoantigen landscape of these diseases (Schischlik et al., 2019). He authored over 110 peer-reviewed publications and several patents. He received the Ignaz Lieben Prize in 2010 for his work on the molecular pathogenesis of MPNs. In 2015, he founded MyeloPro Diagnostics and Research GmbH to develop antibody-based immunotherapy for CALR gene mutated MPNs.