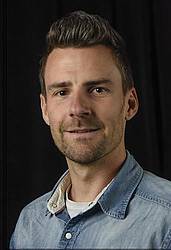 Tim Hendrikx is a molecular biologist who obtained his degree in Biomedical Sciences at the University of Hasselt, Belgium, in 2010. After his studies, he joined the lab of Prof. R. Shiri-Sverdlov at Maastricht University, where he investigated underlying molecular mechanisms of non-alcoholic fatty liver disease, and obtained his PhD degree in 2015.
Following a primary postdoctoral training period in the lab of Prof. C. Binder at the Medical University of Vienna, he joined the lab of Prof. B. Schnabl at the University of California in San Diego in early 2017 for a second postdoctoral period as part of an Erwin-Schrödinger Fellowship.
Since his return in 2019, Tim became Group Leader at the Department of Laboratory Medicine at the Medical University of Vienna.

In his work, Tim aims to improve patient healthcare by studying fundamental research questions underlying chronic liver disease pathology and working in close collaboration with clinical experts to translate his findings from animal models. In particular, his research focuses at the interface of nutrition, microbiome-host interactions and host immunity during (non-) alcoholic fatty liver disease, with the aim to identify novel targets for better treatment strategies and diagnostic tools. As such, he found that steatohepatitis is associated with lysosomal dysfunction in Kupffer cells, resident macrophages in the liver, and that targeting lysosomal cholesterol metabolism protects against disease development (Hendrikx et al., 2014; Bieghs et al., 2013). He also identified that IgM antibodies targeting malondialdehyde epitopes are protective in murine NASH (Hendrikx et al., 2016; Gruber et al., 2016) and that circulatory IgM titers targeting oxidation-specific epitopes are lower in patients with NAFLD (Hendrikx et al., 2016). In recent work, he discovered a novel pathway by which intestinal dysbiosis affects alcoholic liver disease in mice and men, and showed the potential of using engineered bacteria to modulate disease outcome (Hendrikx et al., 2019). So far, he has obtained several prestigious fellowships and awards, including an Erwin-Schrödinger Fellowship (FWF), the Dutch Veni grant (NWO), and the Zukunftkollegs grant (FWF; www.peptaides.com), and published numerous publications in high-ranked journals, including Gut, Gastroenterology, Journal of Hepatology and Hepatology.